As part of my Blizzard Entertainment research I came across the Interactive Entertainment disc magazine that had some Blizzard articles back in 1994 and 1995. On issue #15 from mit 1995, there was Blizzard company special, featuring interviews with some of Blizzard's people of these days. On other IE issues, there were a handful of new Blizzard videos, too, like Pax Imperia 2 previews, but these were usually already available online for quite some time.

These are the Blizzard videos from IE #15 plus some little commentary by me:

General info about Blizzard's announcements at and before E3 1995:
http://www.youtube.com/watch?v=RvOT0buXeyg

Blizzard company history, being the first solid source for IDS being the predecessor of Blizzard. Another (but more loose) source is a stock split press release by Davidson. Also featured is Mike Morhaime's story of how he and Allen (or Ayman) first met.
http://www.youtube.com/watch?v=cxMq9V_cFu0

Blizzard's philosophy (as they still tell today and actually already told to journalists in 1994):
http://www.youtube.com/watch?v=7rUTuIApJfk

Shattered Nations preview that finally tells us that it is similar to Civ and has some elements that we would later also see in Pax 2:
http://www.youtube.com/watch?v=Bf8I9mfxEfE

Long Warcraft 2 preview that sums up the development of the game and its features:
http://www.youtube.com/watch?v=ms9ZgZsmGWc

My current main project KultCDs.com is growing fast, recently. My friend crazy2001 has been scanning lots of magazines and I've been trying to fill some gaps with my scanner, too. A few days ago, we could announce the availability of all 145 regular issues of the German Power Play magazine and today I added 74 issues of PC Action that were mostly scanned by crazy2001. Tomorrow I will add a a great deal of Mega Fun issues that were scanned by c16chris.
The CD Catalog, that is my personal favourite on the website, will soon reach 2000 indexed CDs (currently about 1700) in within the next week.
Eingestellt von Hallfiry um 10:53 Keine Kommentare:

Some time ago, I thought it would be nice to have a way to mod TES Arena even without knowing the game formats too well and without using another obscure custom tool for each format inside the game's main archive global.bsa. So, I compiled my Arena Suite that allows you unpack global.bsa, edit files with tools of your choice and then repack it all into the right formats with just a few clicks. This Suite got only few attention, yet, and it seems like there is only one person actually using it: Martin Pinkerton
He's and avid texture modder of several games and his style boils down to cartoony colored areas, instead of pixely, pseudo realistic surfaces. You should check out his projects and probably leave some feedback.

My Arena Suite is available through a google drive folder and has a fancy readme, so it should be easy to understand. Arena Suite contains currently 3 basic programs:

As mentioned in my last log post, there was a number of petitions, begging for KKnD 3.
For quite a long time, Wikipedia said the following:
"Although it was originally rumored that Melbourne House had another KKnD game in the works, they closed down in 2010."
I removed this phrase and added info about the actual third KKnD game.

There was basically no KKnD3, instead the third game was a spin-off named KKnD: Infiltrator. Those of you with sharp eyes might have noticed these wallpapers on planet.kknd2.com or other websites: 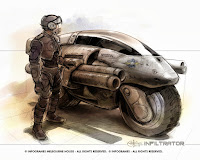 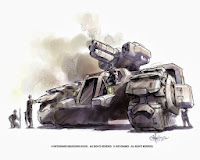 They were sketched down in 1999 by Chris Jones who worked as Lead Cinema Artist on KKnD 2. In 2012 he posted two more artworks on his blog that were part of the cancelled Infiltrator game: 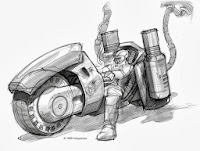 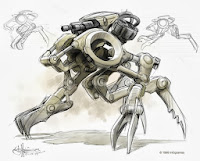 In Retro Gamer issue 37, Justin Halliday (Producer of KKnD 2) talked about the development of KKnD: Infiltrator. He said "it is best described as an action driving game, with the player taking the role of a dirt bike scout who must undertake a series of dangerous missions". The article also tells us, that Infiltrator was cancelled and the engine was used for Mad Max, which was later cancelled due to license problems.
Eingestellt von Hallfiry um 15:27 1 Kommentar:

It's been a while since the last petition tried to force Beam Soft, Melbourne House, Infogrames or Atari to release KKnD 3. In the meantime, there have been some fan projects that tried to revive the series. Be it a mod for C&C Renegade, C&C Generals, Spring or something based on one of the Unreal engines.

Now finally there's a more modest approach in the works: Two friends of mine and I are working on a KKnD 1&2 remake. I'm more of a producer and do some work on file formats, while the other two do the real work and program the game. It will be java-based and the interface is designed to work on desktop PCs and mobile devices. To get 100% KKnD feeling, our game uses the original KKnD 1&2 assets.

Additionally, the game is easy to mod, so you can graft your own strategy game onto it, maybe using sprites from another older strategy game or your own ones. The engine can also handle 3D models and maps, so you can create a full 3D RTS, if desired.

And finally as a proof of concept, some pictures: